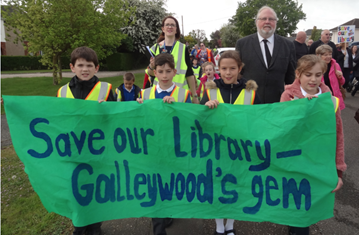 In an Executive Statement in this morning’s County Council Meeting ahead of a motion to the County Council, The Conservative group leader - Councillor Finch  announced that the Library in Galleywood together with all the other libraries in Essex will not be closing. Ex-Chairman of the Galleywood Parish council, Ex-Ward Councillor for Goat Hall and local campaigner Anthony McQuiggan who was at the meeting said. “It was a relief to hear at last the unequivocal statement from Councillor Finch that no Libraries will be closing.  I have been lobbying the County Council for some time and it was great news to hear that the County Council has listened to the consultation response from Galleywood residents and has changed its draft plan, which I understand will be published next week. Citing the importance of the library to the community of Galleywood and the passion with which it spoke as reasons for the new draft shows that the community has communicated clearly and its voice was heard”

Anthony McQuiggan went on to say: “My faith in the consultation process has been restored.  I have been campaigning tirelessly to keep the Library building and service in Galleywood open. From the beginning I have been aware of the strength of feeling locally and have been tirelessly lobbying Councillors and Cabinet members. I am pleased that the County Councillors concerned have listened to the lobby and to the well supported consultation and have redrafted the Library Plan, I am glad to have been an integral part of that and I look forward to seeing the revised and detailed plans.”